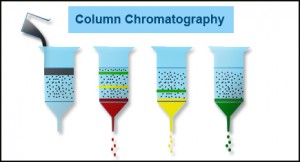 Chromatography is a method widely used in the separation of different compounds, solid and liquid. This method is very helpful in segregating and purifying various components of mixtures, which when separated can be analyzed individually. The chromatography process is a very simple method of separating compounds using a solid as well as the liquid phase. Silica gel, alumina oxide is mainly used as the solid phase, which adsorbs all the unwanted particles as well as all kinds of impurities. When the mixture passes through the mobile phase, then only the required compounds move forward while the unwanted components of the main mixture are left behind.

The main characteristics of Silica Gel are that it is a good adsorbent and has a very large surface area. These two characteristics help it in adsorbing small impurities and allow only the desired molecules to pass through. This property works towards making Silica Gel a highly popular desiccant and adsorbent. Silica Gel finds use in almost all kinds of chromatography. These include analytical, preparative, process and gravity chromatography. In all these forms of chromatography, the solid or stationary phase (Silica Gel) effectively adsorbs the different components at various levels to achieve higher levels of purification. Described below are some of the chromatography methods, which make effective use of Silica Gel as an adsorbent.

Process chromatography is mainly used in industrial and business establishments for the separation and purification of mixtures on a large scale and advanced basis.