Why Flash Chromatography Method is Inexpensive and Quicker? 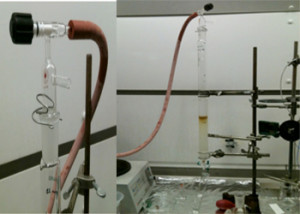 After the process of chemical synthesis, the compounds of interest need to be purified in a proper manner. Some of the popular purification techniques are Crystallization, Separation, Filtration, Liquid-Liquid cleanup and Distillation. All these techniques are vastly used in the laboratories. But there is another purification method that is used for separating two almost the same natural substances. This process is known as Flash Chromatography.

In order to purify complex organic compounds, this process is used since it is a much quicker alternative of column chromatography and also very inexpensive as well. W. C. Stills of Columbia University was the man who first introduced this process to the world in 1978. Now it is one of the most widely used purification processes applied in the labs.

This well-known process uses a column, plastic column basically that is filled with a solid support mostly silica gel 230-400 mesh or silica gel 200-400 mesh. The sample that is to be separated is normally placed on the top of the support (silica gel). The rest of the body of the column is covered with an isocratic solvent. This very solvent makes the sample that is placed on the top of the support run through the column and get separated. In the beginning, air pressure was used for the sample to run through the column. Now pumps are used for this process. This technique is used to separate a few mg to hundreds of grams of sample.

So, what are the differences between flash chromatography and column chromatography? It has been mentioned earlier that the former process is much faster and less time consuming than the latter. Unlike column chromatography, flash columns can be used multiple times which definitely makes an impact on the overall cost of the process. Other than that, the labor cost required is also very less compared to the conventional column chromatography process. All these factors make this process a much widely used in industrial areas.

When it comes to the application of this process, there are a number of applications that include drug discovery, cleaning up of samples, purifying natural products and so many more. There is a relation between flash chromatography and TLC and these two processes are often used in a combined manner prior to and even after the separation using the flash process.